Because of the situation in the Middle East and all of attention that it receives, there hasn't been much written about China and their growing presence in the South China Sea. We also can't forget that China is now also involved in Syria. Below is a nice summary of the evolving situation with China:

The South China Sea Syndrome: Another Nail In America’s Coffin

Sixteen days ago, President Obama and Chinese President Xi sounded as if they were moving forward in a positive manner. The only real point of contention when the two world leaders met at the White House was Taiwan. Oh, on paper, it appears that China’s dispute is with Vietnam, Malaysia, and the Philippines.  Look at the map below and make a note of what Island lies just north of the disputed area. It is Taiwan. This conflict is also about China buidling a defensive perimeter in the South China Sea and using it as a defensive perimeter, in a manner similar to what the Japanese did nearly three quarters of a century ago.

China is increasingly aggressive, almost to the point of forming a quasi-naval blockade in and around the disputed territories which are a point of disagreement between China, her neighbors and the United States. It is critical to keep in mind that every dispute in the region, for China, begins and ends with Taiwan and Taiwan lies just north of the disputed area. These unfolding events in the South China Sea is also about the unfolding of the new Chinese hegemony, or, the establishment of the most recent flavor of the New World Order.

For those who don’t understand why China and Taiwan are at odds, it goes back to 1948, when Chinese communist forces, led by Mao Zedong, ousted the Chinese government under Chiang Kai Shek. The original Chinese regime fled to the Island of Formosa, now called Taiwan. Mainland China has always viewed Taiwan as a rogue state that actually belongs to the communist Chinese. Taiwan has emerged as America’s seventh most significant trading partner. An economically health Taiwan is essential to what is left of the U.S. economy. Ignoring the long-term significance of Taiwan in the South China Sea controversy is like ignoring the 800 pound gorilla in the room. 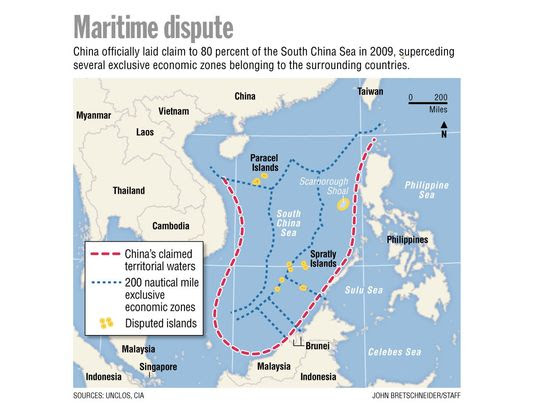 Vietnam, Malaysia and most of all, the Philippines are impacted by aggressive Chinese action in the region in which the Chinese are constructing militarized islands which are serving as an impediment to free trade. The areas of Malaysia, Indonesia, and Vietnam could provide the Chinese war machine with virtually unlimited supplies of oil, rubber and other raw materials needed to maintain a sustainable Chinese war effort if China is able to dominate the region.

Obama and Xi Jinping’s apparent agreement has gone up in smoke- The Chinese have escalated their military activities in the region. This represents a 180 degree turn around from what had been apparently decided upon in the leaders’ meeting on September 25, 2015.

China has not limited their aggressive military actions in that part of the world, they have increased their hostile actions.

The Chinese are now emboldened and obviously see Obama as the weak sister that he is and have subsequently increased their aggression in the South China Sea. On the surface, and with the announcement that Obama is sending a fleet to the South China Sea as a show of force, it appears that the world has yet another flash point that could start World War III. However, I think the Chinese are going to mock this Presidential paper tiger and ignore this fleet while they continue to militarize these artificially constructed Islands.

When Iran began to sell oil for gold to China, Russia and India, this was a de facto declaration of war. The US has staggering debt and without the backing of its currency by the Petrodollar, in which every nation must purchase dollars to buy oil, the dollar would hyper-inflate overnight. The BRICS as they are called are led by China and Russia and they moving the world away from the Petrodollar. Subsequently, it is only a matter of time until the bottom falls out of the US economy. The Federal Reserve wanted to invade Syria and Iran and put a stop to the undermining of the Petrodollar just as they did in Iraq in Gulf War I. However, for the past three years, Russia has checkmated Obama and the Federal Reserve and as a result Iran has grown stronger and the BRICS are destroying the US economy. For the Federal Reserve to survive they now have to go to war against the BRICS. Since they have been ousted in Syria, China seems the best place to start World War III.

The Chinese word for crisis is translated as opportunity. The coming conflict in the South China Sea would allow China, with a victory, to expand its defensive perimeter, just like Japan did 70 years ago. It would also allow them to posture to take back Taiwan which lies north of the tension filled area.


Last week, reports surfaced that the US planned to send warships within the 12-mile zone of China’s artificial islands in the Spratly archipelago. Naturally, the news received condemnation from Beijing.

"We urge the related parties not to take any provocative actions, and genuinely take a responsible stance on regional peace and stability," Chinese Foreign Ministry spokeswoman Hua Chunying said during a news briefing.

Still, comments made by Carter on Tuesday indicate that the US is firmly intent on asserting dominance in the region.


"Make no mistake, the United States will fly, sail and operate wherever international law allows, as we do around the world, and the South China Sea will not be an exception," he said during a news conference.


When asked specifically about the Spratly island patrols, Carter said "We will do that in the time and places of our choosing."

Some Washington analysts believe that a decision has, in fact, been made, and that patrols could begin as soon as this week.

With nearly $5 trillion in trade passing through the waterway every year, the South China Sea is a highly-contested region. While China claims most of the sea, there are overlapping claims by Vietnam, Brunei, Malaysia, and the Philippines.


Neither the United States nor Australia holds any claim in the region.
While Washington has accused Beijing of violating international law with its land reclamation efforts, China has repeatedly asserted its right to build within its own territory. Chinese officials have also denied US claims that the islands will be used to establish a defense zone, insisting that the installations will be used largely for humanitarian purposes.

Iran threatens war in Gulf of Mexico, suicide attacks against US ships

Tangsiri also referred to the IRGC’s hi-tech weapons and equipment, and said they include vessels, missiles, rocket-launchers and some more new weapons.
He underlined the necessity for arming the entire Iranian coasts with the state-of-the-art weapons, and said, “We have dug tunnels all the along the Southern parts of the country and there are so many of these tunnels that the enemy cannot imagine.”
Tangsiri pointed to the home-made torpedo vessel, ‘Zolfaqar’, unveiled in an exhibition in Tehran on October 3, and said that Zolfaqar is a submersible vessel.
There is also a semi-submersible vessel which is equipped with torpedos and radar systems.
He also underscored Iran’s missile power, and said the IRGC vessels are equipped with the home-made high-precision air-based cruise missiles, Nasr and Zafar, that can be fired from small vessels.
“The missiles that we have now can hit the targets with a higher precision than their foreign counterparts, including even the Israeli missiles and the (anti-ship cruise) Penguin missiles,” Tangsiri said.

In relevant remarks earlier this month, Commander of the IRGC Aerospace Force Brigadier General Amir Ali Hajizadeh said all US military bases in the Middle-East are within the range of the IRGC’s missiles, but the country still sees no restriction for boosting its missile capabilities.

“Some of the threats by the US are aimed at appeasing the Zionists, while others are for the purpose of domestic consumption (in the US), but what is important is that they are aware of and acknowledge our capabilities and deterrence power; we do not feel any need to increase the range of our missiles and (our perceived enemy) targets are fully within the range of our missiles,” Brigadier General Hajizadeh said, addressing a group of professors of Iran’s Science and Technology University in Tehran.

He pointed to the allegations made about imposing restrictions on Iran’s missile technology, and said, “We do not see any restriction for our missiles and the IRGC’s preparedness and missile drills are conducted without a halt and according to our annual time-table, but only some of them are publicized through the media.”

“The US knows that the damages of any war and firing bullets in the Persian Gulf cannot be compared with its benefits at all,” Fadavi told reporters on the sidelines of the annual nationwide parades at the mausoleum of the Founder of the Islamic Republic, the Late Imam Khomeini, South of Tehran.
“The US is obedient and passive in the Persian Gulf and we impose our sovereignty right in the Persian Gulf very powerfully,” he added.
Also in May, Fadavi announced that the US forces and warships in the Persian Gulf complied with the orders of the Iranian naval forces deployed in the region.

His comments came after a senior Islamic Revolution Guards Corps commander also announced in May that the IRGC Navy drones and boats were constantly recording movements of the US warships deployed in the Persian Gulf….