Martin Armstrong: "Those In Power Will Risk War And Civil Unrest To Preserve It" | Zero Hedge

Nigel Farage may be the only practical politician these days because he came from the trading sector. He explains the Euro-Project and its failures. He makes it clear that the Greek people never voted to enter the euro, and explains that it was forced upon them by Goldman Sachs and their politicians.

Nigel also explains that the Euro project idea that a trade and economic union would then magically produce a political union – the United States of Europe and eliminate war.

He has warned that the idea of a political union would end European wars has actually filled Europe with rising resentment in where there is now a new Berlin Wall emerging between Northern and Southern Europe.

The Euro project was a delusional dream for it was never designed to succeed but to cut corners all in hope of creating the United States of Europe to challenge the USA and dethrone the dollar.
That dream has turned into a nightmare and will never raise Europe to that lofty goal of the financial capitol of the world.

The IMF acts as a member of the Troika, yet has no elected position whatsoever. The second unelected member is Mario Draghi of the ECB. Then the head of Europe is also unelected by the people.
The entire government design is totally un-Democratic and therein lies the crisis. Not a single member of the Troika ever needs to worry about polls since they do not have to worry about elections.
This is authoritarian government if we have ever seen one.

Now, far too many political jobs have been created in Brussels.
This is no longer about what is best for Europe, it is what is necessary to retain government jobs.
The Invisible Hand of Adam Smith works even in this instance – those in power are only interested in their self-interest and will risk war and civil unrest to maintain their failed dreams of power.

Speaking of the Parliament and their building which was intentionally made to look like the artist rendition of the Tower alone with the slogan "many voices one tongue". 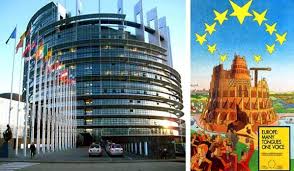 Which reminds us of the main symbol of the EU, as shown in front of the EU Council Building in Brussels: 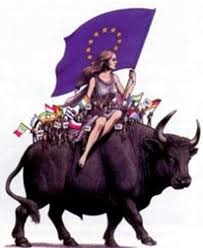 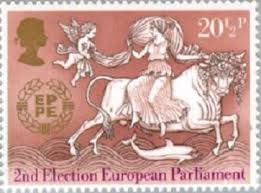 There has been so much attention on Greece in recent weeks, but the truth is that Greece represents only a very tiny fraction of an unprecedented global debt bomb which threatens to explode at any moment.  As you are about to see, there are 24 nations that are currently facing a full-blown debt crisis, and there are 14 more that are rapidly heading toward one.

Right now, the debt to GDP ratio for the entire planet is up to an all-time record high of 286 percent, and globally there is approximately 200 TRILLION dollars of debt on the books.

That breaks down to about $28,000 of debt for every man, woman and child on the entire planet.  And since close to half of the population of the world lives on less than 10 dollars a day, there is no way that all of this debt can ever be repaid.  The only “solution” under our current system is to kick the can down the road for as long as we can until this colossal debt pyramid finally collapses in upon itself.

As we are seeing in Greece, you can eventually accumulate so much debt that there is literally no way out.  The other European nations are attempting to find a way to give Greece a third bailout, but that is like paying one credit card with another credit card because virtually everyone in Europe is absolutely drowning in debt.
Even if some “permanent solution” could be crafted for Greece, that would only solve a very small fraction of the overall problem that we are facing.  The nations of the world have never been in this much debt before, and it gets worse with each passing day.
According to a new report from the Jubilee Debt Campaign, there are currently 24 countries in the world that are facing a full-blown debt crisis…

Once all of these dominoes start falling, the consequences for our massively overleveraged global financial system will be absolutely catastrophic…

Spain has over $1.0 trillion in debt outstanding… and Italy has €2.6 trillion. These bonds are backstopping tens of trillions of Euros’ worth of derivatives trades. A haircut or debt forgiveness for them would trigger systemic failure in Europe.
EU banks as a whole are leveraged at 26-to-1. At these leverage levels, even a 4% drop in asset prices wipes out ALL of your capital. And any haircut of Greek, Spanish, Italian and French debt would be a lot more than 4%.

Things in Asia look quite ominous as well.
According to Bloomberg, debt levels in China have risen to levels never recorded before…

In Japan, things are even worse.  The government debt to GDP ratio in Japan is now up to an astounding 230 percent.  That number has gotten so high that it is hard to believe that it could possibly be true.  At some point an implosion is coming in Japan which is going to shock the world.
Of course the same thing could be said about the entire planet.  Yes, national governments and central banks have been attempting to kick the can down the road for as long as possible, but everyone knows that this is not going to end well.
And when things do really start falling apart, it will be unlike anything that we have ever seen before.  Just consider what Egon von Greyerz recently told King World News…
So what do you think is coming, and how bad will things ultimately get once this global debt crisis finally spins totally out of control?

A magnitude-7.5 earthquake has struck the Santa Cruz Islands in the South Pacific and a tsunami threat message has been issued for other parts of the Pacific closer to the epicenter.
The Pacific Tsunami Warning Center says there is no threat to Hawaii. It says hazardous waves are possible for coasts located within 300 kilometers (186.42 miles) of the Santa Cruz Islands, mainly the Solomon Islands as well as Vanuatu and Nauru.

The Santa Cruz Islands are about 2,252 kilometers (1,400 miles) northeast of Brisbane, Australia.
There are no immediate reports of damage or casualties.

Just four hours after an earthquake shook Barbados and neighbouring islands, another stronger quake has been recorded.
There are reports of people panicking and buildings being evacuated as the 6.4 magnitude tremor shook around 11:16 a.m.
It occurred about 125 km northeast of the capital, Bridgetown; 234 km east of Castries, St. Lucia and 255 km east southeast of Fort-de-France, Martinique.
St. Lucia, Trinidad and Dominica are among the other Caribbean islands that felt the tremor, based on reports on social media.
The earlier 5.7 magnitude tremor hit at 7:01 a.m., at the same distance from Barbados, but 240 km east of Castries and 262 km east southeast of Fort-de-France.

A rare magnitude 6.5 earthquake has struck East of Barbados in the Southeast Caribbean. (now revised to M6.4 by the USGS)

Less than 24 hours ago, a new deep earthquake occurred in the Asthenosphere below the West Pacific.  This deep movement sent off a new round of activity across the globe, particularly showing up as multiple swarms, and now a large earthquake near the well known Caribbean volcanic island chain.

One thing that is for sure! !!!!!!When Iran calls us ( the great satin (government ) its surely the truth.But I would also say that they are a extended arm of the US government ,just as wicked.The north American European Union! What a joke. I think someone needs to tell the united states goverment that they can't own the entire world,oooooops I forgot someone did 2000 yrs ago,That little dot on the map Isreal.God promised to abraham, that the land is for the jews/Isrealites & only them.Every world leader knows this & are willing to test the lord our God now.

I've been scenario thinking these last few days. I'm just wondering if Israel nukes Iran could this be what the bible speaks about the levelling of Damascus over night? Could this be what causes the nations to rise against Israel? If so, the rapture of the Church could come (it could come now) somewhere along this time ........ Just thinking out loud