Sign of the times? Volcanic activity at record levels 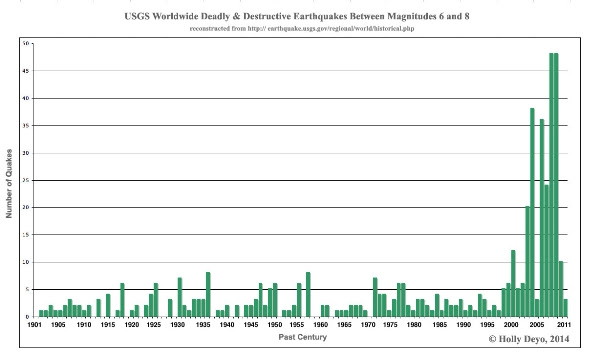 The earth’s core is getting more restless, grinding and shifting underfoot, and increasingly spewing forth its fury.

From Alaska and Hawaii to Japan, Malaysia, Ecuador, Iceland and Russia, the amount of volcanic activity has been at or near record levels in recent years, some scientists say. But apparently measuring such activity over time is not an exact science. Other scientists believe the level of activity is normal but that the speed of communications and increased media coverage makes it seem out of the ordinary.
Earthquakes, however, are clearly running at historically high levels since 1900, according to statistics from the U.S. Geological Survey.
All the while students of the Bible are pointing to Matthew 24 and saying “I told you so.”
They read in the flowing lava and glowing night-time outbursts a biblical warning sign that can’t be dismissed.
At the U.S. Geological Survey’s website, the number of earthquakes that have registered in the 6-plus range are as follows since 2005.

The most recent temblors were a series of three small earthquakes in Perry, Oklahoma, June 12 that measured between 3.1 and 3.9 on the Richter Scale. That same day, a 3.4 quake occurred in Caliente, Nevada. And on May 29 a much stronger 6.7 quake hit northwest of Chirikof Island, Alaska. The next day, on May 30, a massive 7.8 quake rocked Chichi-shima, Japan.
“The number has more than doubled over the last 10 years,” says Mark Biltz, pastor of El Shaddai Ministries and author of the popular book “Blood Moons: Decoding the Imminent Heavenly Signs.”
The reason Christians interested in prophecy stay tuned-in to seismic activity is because of Jesus’ words in Matthew 24. Jesus spoke of wars and rumors of wars, earthquakes and famines increasing in the days before his return.
“It was prophesied that there would be earthquakes at increased levels before the return of the Messiah and they were to be likened to birth pangs,” Biltz said. “With the increase in activity and the increase in magnitude I definitely see it as being but another sign along with the signs in the heavens that we are at the door!”

Here are just some of the world’s most active volcanoes:

According to an article at Extinction Protocol, a blog about seismic activity, the most ominous sign is increased activity at the world’s super volcanoes, one of which sits in the United States.

“Unrest also seems to be growing among the world’s super-volcanoes. Iceland (which is home to some of the most dangerous volcanoes on the planet), Santorini in Greece, Uturuncu in Bolivia, the Yellowstone and Long Valley calderas in the U.S., Laguna del Maule in Chile, Italy’s Campi Flegrei – almost all of the world’s active super-volcanic systems are now exhibiting some signs of inflation, an early indication that pressure is building in these volcanic systems.”

The number of earthquakes is also dramatically up since 1980.