I guess Macron hasn’t really looked out the window and been on the street lately. The people of France, along with people around the world, are throwing off these satanic globalist, like Macron, and opting for people that are at least carrying out some of their wishes. Macron would do well to know what has happened in Italy, Austria, Hungary, Brazil and it might be helpful to pay attention to the fight going on with BREXIT. These are all clues, you moron, as to why this woman being injured is a big deal and your smug response is nothing more than fuel for the fire.
Macron thinks the military is going to open fire on their neighbors, family and friends – it may happen on a small scale where you get some zealot that loses his/her mind, but the vast majority of French military/police are not going to begin killing other Frenchmen.

French President Emmanuel Macron has told a newspaper he hopes a 73-year old Yellow Vest protester who suffered serious head injuries after being charged by police in Nice, gains “wisdom” over the incident.
Anti-globalisation activist Genevieve Legay remains in hospital Monday after police advanced aggressively on people defying a protest ban Saturday.
An Associated Press reporter saw Legay, who was waving a rainbow flag marked “Peace”, fall to the pavement, blood spilling from her head.
In an interview published in Nice Matin on Monday, Macron suggested Legay didn’t behave “responsibly,” saying that “fragile” people shouldn’t attend “places that are defined as prohibited.”
He added: “I wish her a speedy recovery, and perhaps a form of wisdom.”
At least 2,000 people have been injured in Yellow Vest protest violence. 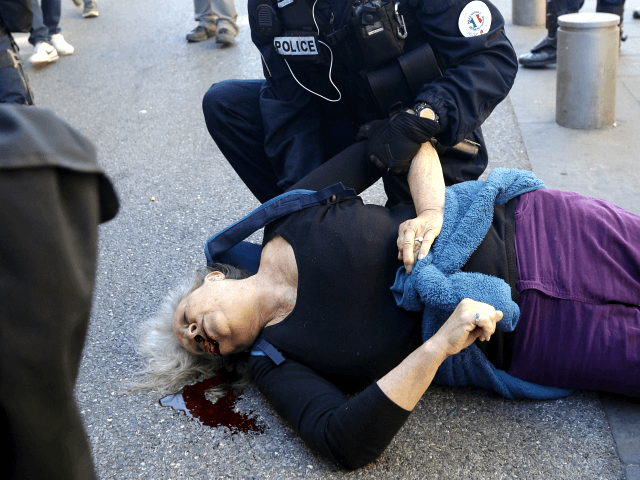 Police Crack Down on Pro-Brexit Truckers for 'Go Slow' Protest