Government Is The Main Problem, Say A Record Number Of Americans

Authored by Jeffrey Tucker via The American Institute for Economic Research,

Think of all the troubles in the world. Climate change. Student debt. Terrorism. Job insecurity. What’s the number one most mentioned problem, according to a recent Gallup poll? Government itself. Thirty-five percent of Americans put that concern above all others. It’s a record number, according to the pollsters who have been tracking this since 2001. 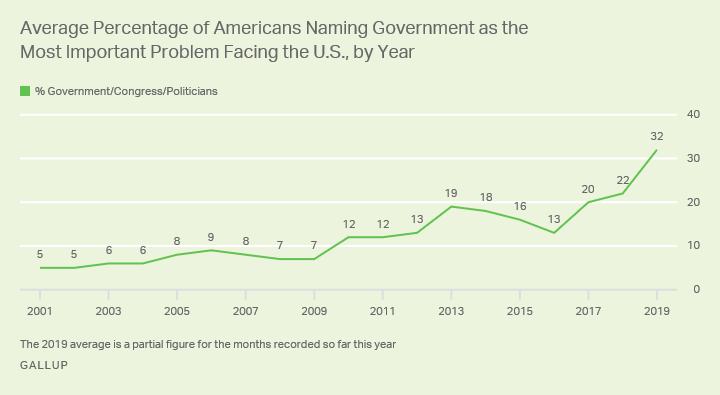 Not only that: there have only been a handful of times when any number one issue clocked in with this level of intensity: terrorism after 9/11, Iraq after the war began, and the economy after 2008.
When I saw the numbers, my first thought was that Democrats made up the margin of change. They don’t like the president. He drives them crazy. So it makes sense that they would more quickly name government as the leading problem — which in turn raises the question of why they would push so hard for government to exercise more power over our lives.
It turns out, however, that it is not movement among Democrats but among Republicans that is the most noticeable on the graphs.

Having Trump as their president in office, then, has not increased confidence in government. If anything, it has had the opposite effect, turning Republicans themselves against government as never before. But notice that the loathing is nonpartisan.
Other polls such as Pew Research report similar results, with only 18 percent showing confidence in government at all. This is down from 78 percent half a century ago.

This doesn’t necessarily mean that government is getting worse. It suggests instead a kind of rising consciousness about a problem that has been there all along, from Woodrow Wilson to Donald Trump.

Government is the least effective way to solve any social problem. It overrides the capacity of people to deal with their lives and problems in a way that is manageable and adaptable. It creates bureaucracies instead of solutions, wastes resources while everyone else is trying to conserve them, and entrenches rules that do not pertain in a world of fast-paced technological development.

What these two years of political wrangling have shown us is something that will be unavoidable in the coming years. There will never be unified government, operating with a single goal, whether that proposed goal is a restoration of nationalism or the elimination of fossil fuels supposedly to save the planet. The vast gulf that separates the two parties, with extremes driving the ideological debate on either side, is what government now has to offer us. Which is to say: more division, more vituperation, more politics of dogs eating dogs.