Iran's Use Of Surrogates To Attack U.S. Interests: It's Already Started

The exchange of words between the Trump administration and senior leaders in Iran got a lot of press this week.  On Sunday, Iranian President Rouhani warned America against courting the “mother of all wars,” his characterization of what war with Iran would be.  In a speech to a gathering of Iranian diplomats, Rouhani reiterated a previous oblique implication that Iran would prevent all oil exports from the Persian Gulf if the U.S. tried to block Iranian exports.
A senior military officer made the threat more explicitly:
On Sunday, Iran’s ground forces commander became the latest military figure to back Rouhani’s apparent threat, the semi-official news agency Tasnim reported.
“The Strait of Hormuz region must either be safe for all or be insecure for everyone,” said General Kioumars Heydari, quoted by Tasnim.

To Iranian President Rouhani: NEVER, EVER THREATEN THE UNITED STATES AGAIN OR YOU WILL SUFFER CONSEQUENCES THE LIKES OF WHICH FEW THROUGHOUT HISTORY HAVE EVER SUFFERED BEFORE. WE ARE NO LONGER A COUNTRY THAT WILL STAND FOR YOUR DEMENTED WORDS OF VIOLENCE & DEATH. BE CAUTIOUS!
— Donald J. Trump (@realDonaldTrump) July 23, 2018

The White House just issued this statement from John Bolton. “I spoke to the President over the last several days, and President Trump told me that if Iran does anything at all to the negative, they will pay a price like few countries have ever paid before.”
— Kaitlan Collins (@kaitlancollins) July 23, 2018
Iranian Foreign Minister Javad Zarif tweeted back.

COLOR US UNIMPRESSED: The world heard even harsher bluster a few months ago. And Iranians have heard them —albeit more civilized ones—for 40 yrs. We’ve been around for millennia & seen fall of empires, incl our own, which lasted more than the life of some countries. BE CAUTIOUS!
— Javad Zarif (@JZarif) July 23, 2018

(Somehow, with all this going on, Twitter is managing to lose users and market capitalization.)
On Thursday, 26 July, Iranian Qods Force commander Qassem Soleimani was quoted by the Tasnim news agency continuing Iran’s theme:

Maj Gen Soleimani – who leads the Quds Force of Iran’s elite Revolutionary Guards – was quoted on Thursday as saying:
As a soldier, it is my duty to respond to your threats.
Talk to me, not to the president [Hassan Rouhani]. It is not in our president’s dignity to respond to you.
We are near you, where you can’t even imagine. Come. We are ready.
If you begin the war, we will end the war. You know that this war will destroy all that you possess.

All of this, we have heard plenty about in the mainstream media news.
Much less widely reported has been an apparent salvo of threats, actual and carried out, by Iran-backed Houthi rebels in Yemen – against regional commerce.
As it stands at the moment, it is still possible to characterize the damage done to a Saudi oil tanker in the Red Sea by a Houthi missile as a continuation of the occasional Houthi attacks on Saudi coalition vessels that started in late 2016.  That may be a reason why the latest attack, which occurred on Wednesday 25 July, has gotten little coverage in Western media.
But the sequence of events on Wednesday and Thursday suggests it’s more than that.  The morning of 25 July, Houthi sources reportedly took credit for targeting a Saudi vessel in the Red Sea. Regional reporting suggested their intended target was Saudi frigate Al-Dammam (F-816).

Soleimani’s modus operandi is to push out to lines of confrontation where he can advance Iran’s agenda, using proxies, as far from Iran as possible.  He will utter threats relating to both the Strait of Hormuz and the homeland of the United States – but he will seek to make things happen where America must either back down or be drawn in, at a logistically convenient distance (both geographic and political) from Iran. 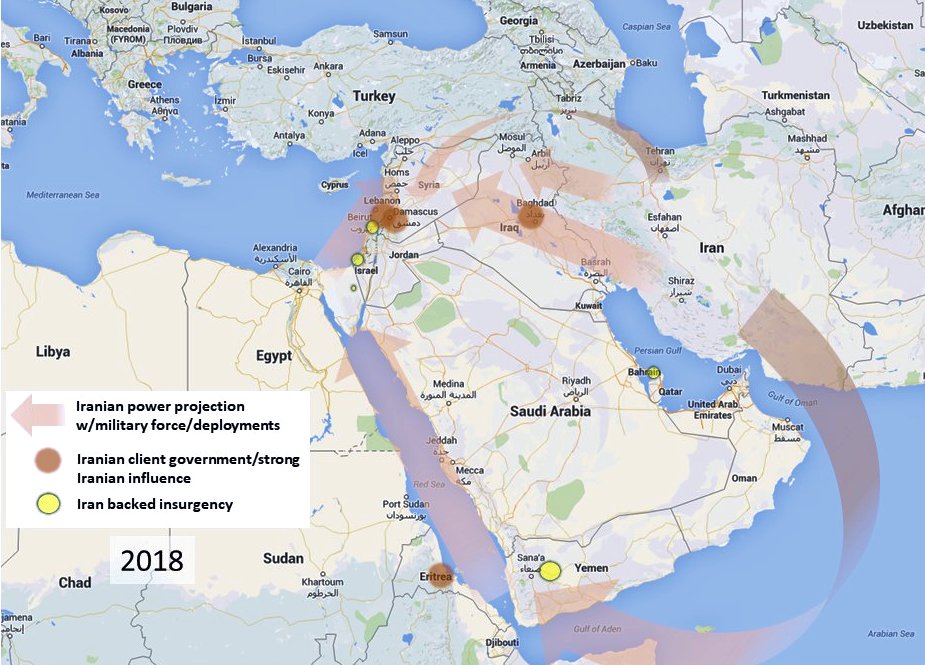 Iran’s grand flanking maneuver in 2018. Some regional political realities have shifted, but the geography of the push remains constant. Note that since 2015, Iran has arrived within a hair’s breadth of completing her land bridge to Syria. (Google map; author annotation)

Soleimani certainly didn’t need my help to think up the concept of challenging U.S. power by rattling the saber through the Houthis in the Red Sea.  But the likelihood is strong that that is what’s going on.  Besides the timing of the Iranians’ fit of talkativeness, the pattern of strategy is telling.

The Iranians, however, would at some point want to see other foreign shipping put at risk for maximum effectiveness.  There are multiple ways to accomplish that, such as arming Al-Qaeda in the Arabian Peninsula (AQAP) factions holding coastline positions on the Gulf of Aden (through cut-outs if necessary), and using the Hezbollah “trainers” embedded with the Houthis for unclaimed, shoot-and-scoot attacks.  Once an Iranian-sourced weapon has been used, Iran can use it again and leverage uncertainty about who actually launched the attack.

If Iran slow-rolls this on a coy, shoot-and-watch timeline, it may unfold slowly.  Other measures – outside of tactical, small-scale confrontations like this – may be in the scope of U.S. plans already, and if they have a preemptive effect, little may come of this week’s work.
But if it does become a widening pattern in the Red Sea, it will have to be addressed.  We’ll be taking some of those carefully assembled unique capabilities out for a test-drive.