A pair of earthquakes rattled parts California on Thursday in the latest sign of seismic activity this week along the "Ring of Fire," but the shaking did not result in any reports of damage or injuries.
The United States Geological Survey said the first quake, with a magnitude of 4.0, occurred just after 2 a.m. Thursday about 31 miles southeast of Anaheim.
The Southern California quake had a depth of about six miles, according to the USGS. The Orange County Sheriff's Office told The Associated Press it had not received reports of any injuries or damages.
A second quake with a preliminary magnitude of 5.8 was reported around 11:40 a.m. local time about 135 miles southwest of Eureka in the Pacific Ocean, according to the USGS.

The quake had a depth of about three miles, but no tsunami was expected, the U.S. National Tsunami Warning Center said on Twitter. The Ferndale Enterprise reported on Twitter the rolling quake was felt in Ferndale, a city in Humboldt County that has many well-preserved Victorian homes.

The twin temblors came two days after a magnitude 7.9 quake off the coast of Alaska trigged tsunami alerts for the West Coast of the U.S., and one day after a magnitude 6.2 earthquake struck off the coast of Japan.
'RING OF FIRE' FURY STRIKES ALASKA, PHILIPPINES, JAPAN
The events were only the most recent in the volatile "Ring of Fire," where more than half the world's active volcanoes located above ground reside.
So far this week, activity in the area has included volcanic eruptions in Japan and the Phillipines, and Tuesday's earthquake off the coast of Alaska.

Lava spewing from the Philippines' most active volcano has flowed nearly two miles from the crater in a spectacular but potentially deadly eruption.
Mount Mayon has sent lava more than 600 metres into the air and massive plumes of ash and smoke nearly 5km above the crater, forcing thousands of locals and tourists to flee to safety.
The volcano gushed out lava and molten rock again on Wednesday, its violent explosion at the tail-end of a week of ominous rumbling. 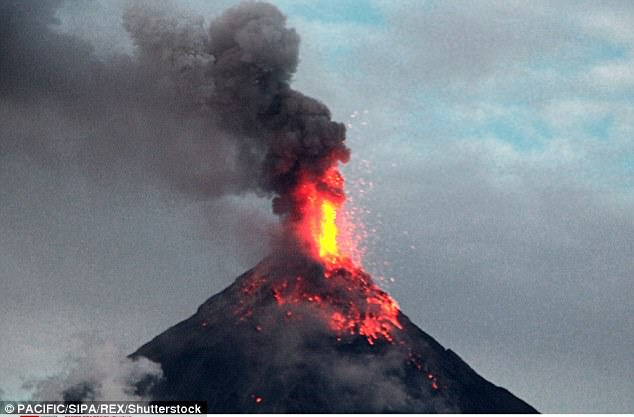 Over 61,000 people have been forced to evacuate from nearby villages as thick smoke descends from the mountain.
Spectacular time-lapse footage shows the gradual eruption of the picturesque mountain from small puffs of smoke to spewing out thick molten lava.
Volcanologists on Monday warned of a hazardous eruption within days and a no-go zone was extended from six kilometres of the crater to nine kilometres, forcing local officials to order further evacuations as ash rained down on communities.
At the shelters, people sleep on the floor and each shares a single toilet with 49 other people, the Philippine Red Cross said.
'Their numbers ballooned after the danger zone was expanded,' Rose Rivero, Red Cross administrator for the region, told AFP.
Mostly farmers and their families, the evacuees are surviving on food handouts from the government and charities, with the Red Cross pitching in with drinking water, counselling, and hygiene items, she added.
'If we go back to its (Mayon's) history of eruption, it would take three to four months before we could send them back to their homes,' Rivero said.


Japan struck by 6.4 earthquake as Ring of Fire roars in Pacific amid tsunami threat


The Ring of Fire – also called the circus-Pacific belt – is a band that stretches 25,000 miles around the Pacific Ocean.
It goes from New Zealand, up the Asia-Pacific coast across Japan and northern Russia, before skirting down Alaska, Canada, the US west coast and down to the bottom of South America.
Around 90% of the world’s earthquakes occur along the Ring which is the most seismically active region in the world.
And the Ring of Fire appears to have roared into life in the past day with a series of colossal events striking across the Pacific.
Japan’s northern-most island Hokkaido was today shaken by a 6.4 magnitude earthquake after two huge tremors and two volcano eruptions in the last 36 hours.
The UN Officer for Disaster Risk Reduction tweeted that the Ring of Fire has been “active” and shared a map of the basin.