Memories of the atrocity in Paris are fresh, along with fears of what a comparably armed and motivated terrorist squad could do to a huge throng of revelers at the New Year’s Eve celebration in a major city. Intelligence agencies in the U.S. and Europe are reportedly nervous about a terrorist threat of some kind.
Following is a list of major New Year’s Eve cancellations and restrictions:

Paris: The city of Paris also decided to ban fireworks, replacing them with a mere 10-minute light show projected onto the Arc de Triomphe. Citizens are reportedly choosing to stay home on New Year’s Eve in unprecedented numbers. Parisian hoteliers and restaurant owners reported a stunning 50 percent drop in bookings for the holiday night.

Moscow: Red Square will be closed on New Year’s Eve, a decision preposterously presented by the Kremlin as accommodating a television crew. The Moscow Times suggested that revelers repair to one of the city’s 21 parks, noting that ice-skating rinks will remain open until 3 A.M.

Vienna: Following what Austrian authorities described as a warning from a friendly, but unnamed, national intelligence service, security went on high alert for a possible terrorist attack between Christmas and New Year’s Day.

Berlin: Berlin’s “party mile” between the Brandenburg Gate and Victory Column has been cordoned off since Christmas, to prepare heightened security for New Year’s Eve. According to Deutsche Welle, “backpacks, bags, suitcases, folding chairs, glass bottles, fireworks, megaphones and laser pointers are all prohibited.”

London: Increased security in the U.K. definitely is related to the warning from Austria, which was reportedly delivered by the nameless “friendly intelligence service” to several European capitals. The UK Telegraph reported on Wednesday night that Scotland Yard has canceled all New Year leave for armed officers, for the first time ever.

Las Vegas: The Strip draws well over 300,000 people for New Year’s Eve festivities, and they are being encouraged to leave bags, backpacks, strollers, and similar containers at home this year. At least a thousand uniformed officers, plus an undisclosed number of undercover police, will provide security. Police teams have been receiving active-shooter training at the out-of-commission Riviera casino.

Almost entirely submerged, dozens of towns and villages across Missouri and Illinois lay abandoned after another day of historic flooding.
These shocking photographs show how floodwater has swamped settlements and forced widespread evacuations in a crisis that had claimed more than 20 lives - and officials warn there are more deaths to come.
Among those dead were five foreign soldiers - four from north Africa and one from Malaysia - training at a military base in Missouri. The car they were travelling in was swept off a rural highway on Saturday night by rampaging water.
Up to 17million people and thousands of homes in Illinois and Missouri are under threat from the floods, with swollen rivers and streams pushed to virtually unheard of heights.
Inmates were transferred out of Illinois state prison as it was threatened by flooding, Missouri's governor activated the National Guard to help divert traffic from submerged roads, and torrential rain caused sewage to flow unfiltered into waterways.
Forecasters warned that the devastation could rival that seen in the area in 1993, when severe flooding left 50 dead and caused $15billion in damage in what officials said was one of the 'most damaging natural disasters to ever hit the United States'. 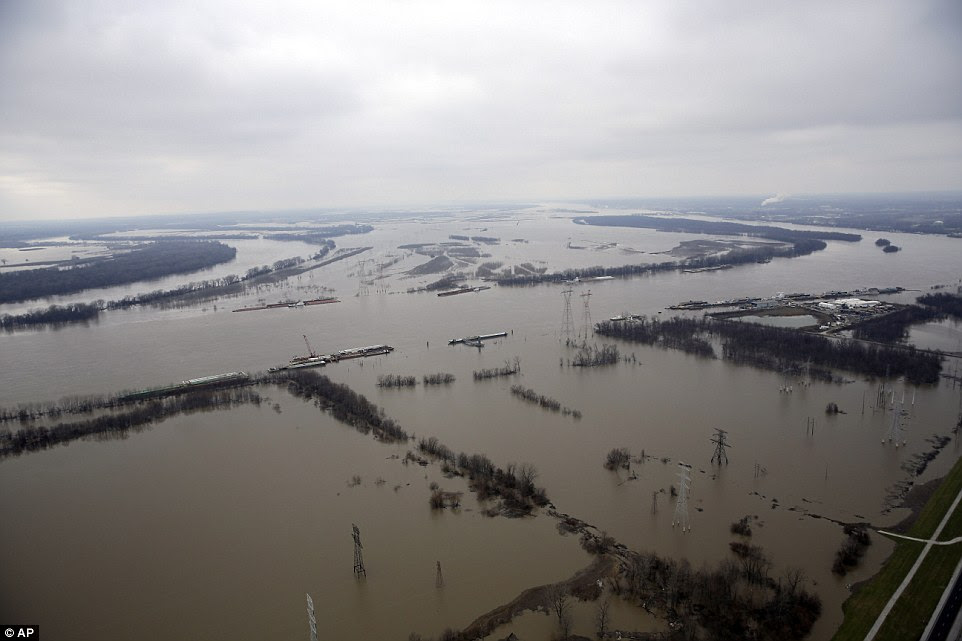 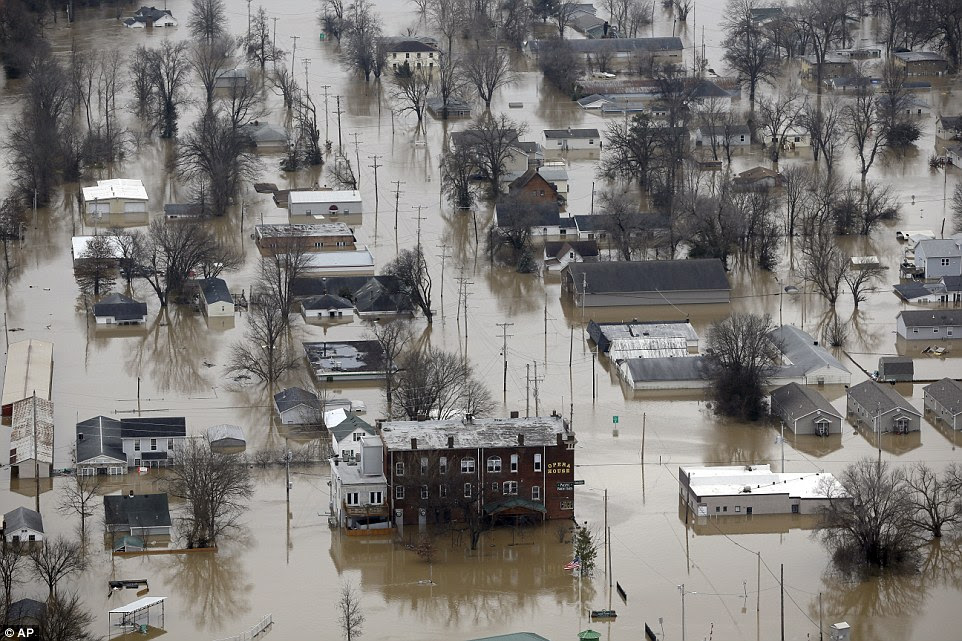 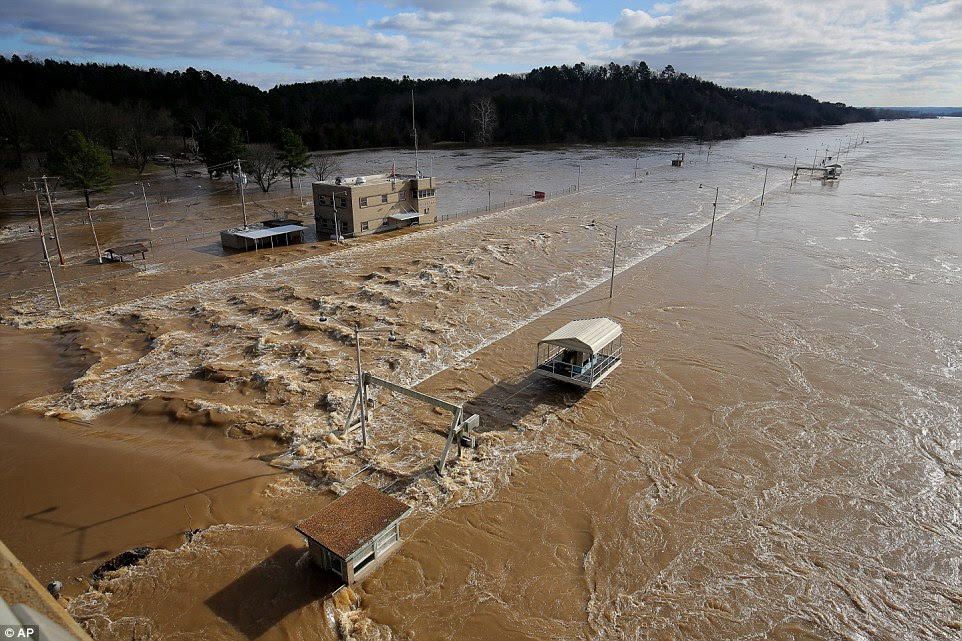 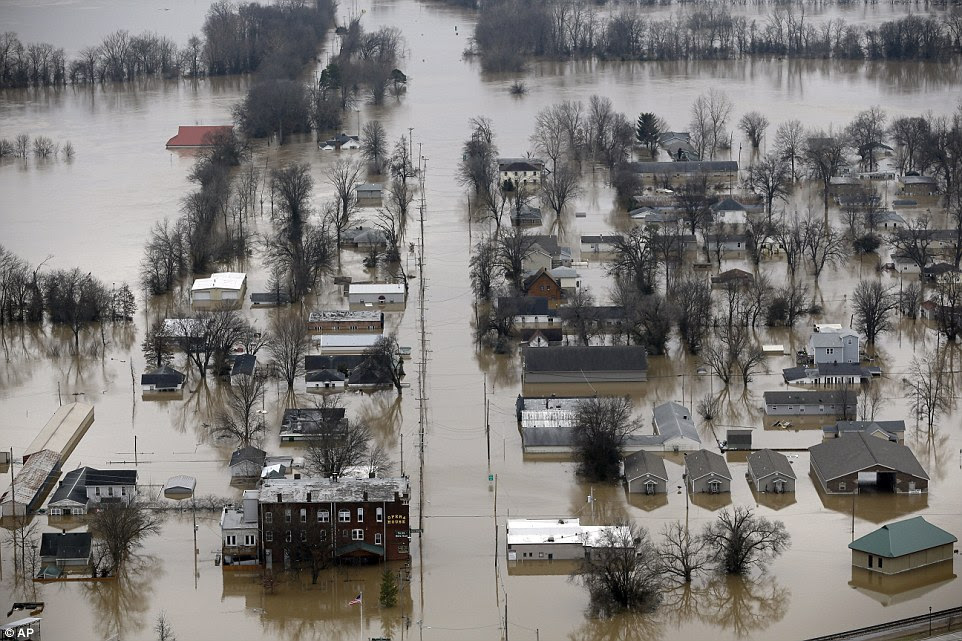 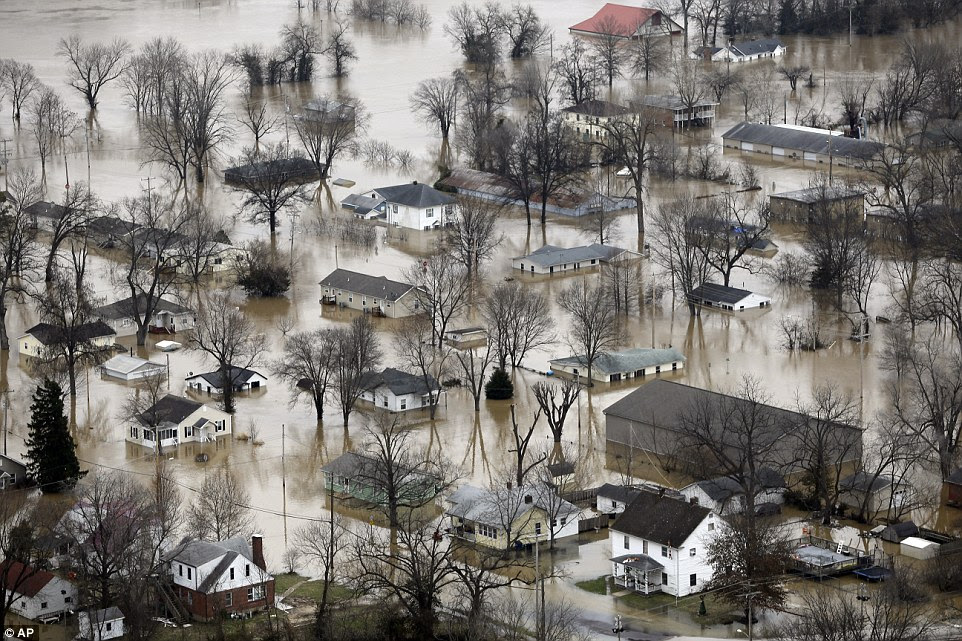 If you found out that one of your “friends” was secretly peeking in your windows at you and your family throughout the day, would that person continue to be your friend? Of course not. But that is exactly what Barack Obama has been doing to Israel. According to the Wall Street Journal, during Obama’s first term the decision was made to monitor the communications of Israeli Prime Minister Benjamin Netanyahu and other Israeli leaders. This represents an astounding betrayal of our closest ally in the Middle East, but the scandal doesn’t end there. In the process of monitoring Netanyahu and other Israeli leaders, the NSA also collected private conversations that they had with members of the U.S. Congress. So that means that Obama and the NSA were spying on Congress, which is a very serious violation of the law.
This wasn’t supposed to happen. Two years ago, Obama promised that he was going to quit spying on the leaders of other nations that we are allied with.
But just like most of Obama’s other promises, this one proved to be hollow as well. The following comes from the Wall Street Journal…

President Barack Obama announced two years ago he would curtail eavesdropping on friendly heads of state after the world learned the reach of long-secret U.S. surveillance programs.
But behind the scenes, the White House decided to keep certain allies under close watch, current and former U.S. officials said. Topping the list was Israeli Prime Minister Benjamin Netanyahu.

So when did all of this spying on Israeli officials originally start happening?
Apparently, the surveillance of Netanyahu began “late in Obama’s first term in office”…

The NSA began keeping tabs on the Israeli Prime Minister late in Obama’s first term in office. The surveillance was driven by fears that Israel was planning an attack on Iran.
The agency carried on with its spying operations, and discovered that Netanyahu had leaked details of the Iran negotiations – which could have jeopardized the deal – and had coordinated talks with American Jewish groups. He also asked undecided U.S.lawmakers what it would take to win their vote.

According to the Wall Street Journal, the NSA has “spent decades” building up the infrastructure to spy on other global leaders. Over the past couple of years spying on some allied leaders has stopped, but apparently that was never even a consideration when it came to Israel…

The NSA had, in some cases, spent decades placing electronic implants in networks around the world to collect phone calls, text messages and emails. Removing them or turning them off in the wake of the Snowden revelations would make it difficult, if not impossible, to re-establish access in the future, U.S. intelligence officials warned the White House.

This is yet again another scandal which could bring down the Obama presidency. Of course the Republicans have never shown any willingness to stand up to Obama, but if they ever somehow did find enough courage to do so, they would certainly have all the ammunition that they would need. Because in the process of monitoring Israeli leaders, the NSA was also spying on the private conversations of members of Congress…

The National Security Agency’s targeting of Israeli leaders and officials also swept up the contents of some of their private conversations with U.S. lawmakers and American-Jewish groups. That raised fears—an “Oh-s— moment,” one senior U.S. official said—that the executive branch would be accused of spying on Congress.

Many prominent voices are already using the phrase “abuse of power” in connection with this scandal. Just consider the words of former U.S. Representative Pete Hoekstra…

Former Michigan Rep. Pete Hoekstra, who chaired the House intelligence panel from 2004 to 2007, called for a probe late Tuesday, remarking that the Obama administration had exhibited an “unprecedented abuse of power” if the allegations are true.
“WSJ report that [National Security Agency] spied on Congress and Israel communications very disturbing. Actually outrageous,” he tweeted. “Maybe unprecedented abuse of power.”
“NSA and Obama officials need to be investigated and prosecuted if any truth to WSJ reports,” he continued. “NSA loses all credibility. Scary.”

“The House Intelligence Committee is looking into allegations in the Wall Street Journal regarding possible Intelligence Community (IC) collection of communications between Israeli government officials and members of Congress,” Chairman Devin Nunes (R-Calif.) said in a statement. “The Committee has requested additional information from the IC to determine which, if any, of these allegations are true, and whether the IC followed all applicable laws, rules, and procedures.”

Regardless of what happens in Congress (which probably won’t be much), the big story is what this will do to our already damaged relationship with Israel.
By systematically conducting surveillance on Israeli Prime Minister Benjamin Netanyahu and other Israeli leaders, the Obama administration has shattered what little trust remained between the two governments.

Israel’s military and political leaders became intensely anxious Tuesday, Dec. 29, when they saw how concentrated Russian air strikes were swiftly dislodging anti-Assad rebels from southern Syria and beginning to open the door for the Syrian and Hizballah armies to come dangerously close to the Israeli border.
DEBKAfile’s military and intelligence sources report that Russian air strikes in other parts of the country have tapered off. Instead, heavy Russian bombardments are giving the combined Syrian-Hizballah force its first chance to recover Sheikh Maskin, the southern town housing the Syrian Army’s 82ndBrigade which has been passing from hand to hand for months. If the rebels lose that fierce battle, the way will be clear for the combined pro-Assad force to advance on the two key southern towns, Deraa and Quneitra on the Golan.
The rebel groups assaulted by the Russian air force Tuesday included moderate, pro-Western, pro-Israeli militias, such as the Southern Front and the First Column. Both suffered heavy casualties.
IDF unease as a result of Russia’s aerial intervention in the fighting in southern Syria is rising in proportion to the current military tensions with Hizballah. If the Lebanese Shiite terrorists manage to get the late Samir Quntar’s anti-Israel terror Front for the Liberation of Golan up and running, the Israeli air force would be severely hampered in launching its own strikes against this enemy by the dozens of Russian bombers using the same patch of sky without pause.
On the face of it, Moscow and Jerusalem make a show of their smooth air force collaboration in Syrian air space. But this picture is wide of the situation: The Russian air force omitted to notify Israel ahead of its massive bombardment close to its border Tuesday.
Some Israeli official circles suspect that Moscow is deliberately bringing Israel under pressure to accept a deal for southern Syria. One of President Vladimir Putin’s main objects from the outset of Russian’s military buildup in Syria was to eradicate the rebels in the South and the threat they posed to the Assad regime in Damascus.
More than once, Putin suggested to Prime Minister Binyamin Netanyahu that they work out a Russian-Israeli deal for that part of Syria. The Israeli leader was unresponsive, mainly because Israel is bound by prior understandings to coordination with the US, Jordan and moderate Syrian rebel groups. A deal with Moscow would counter those understandings.
However, The concentrated air strikes in the border region is intended by the Kremlin, according to some views, not just to push the rebels out, but to twist Israel’s arm for settling the issue with Moscow.

Inside the Ring: China preps for space warfare - Washington Times

2015: The Year of Anti-Christian Jihad, ‘Christians Are Allah’s Enemies!’ - Breitbart