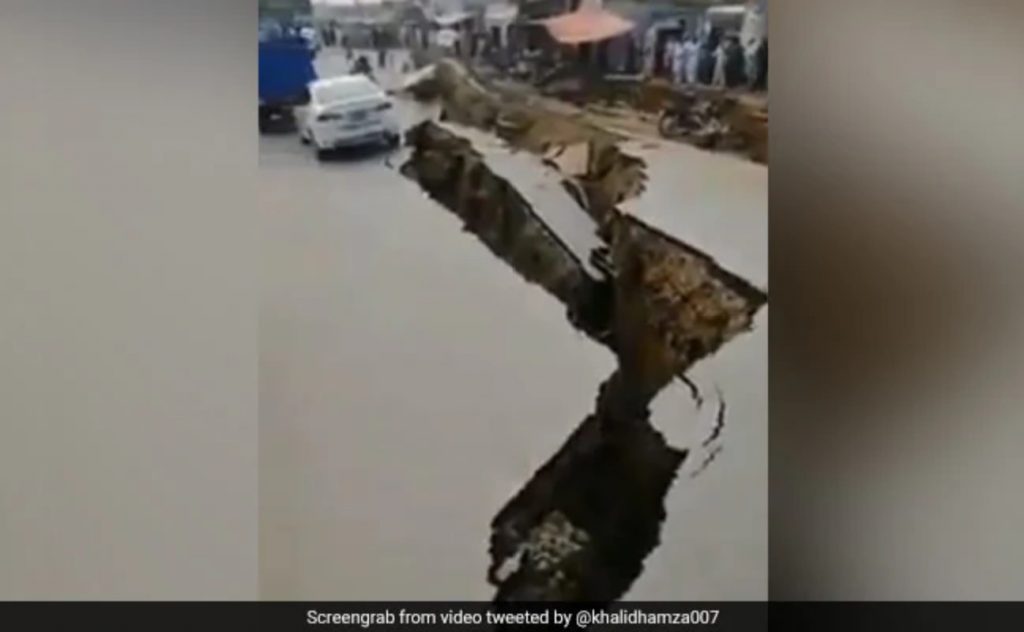 A deadly M5.8 earthquake hit Pakistan on September 24, 2019. Picture shows a crack in a road in Mirpur after the quake.

At least 19 people have been killed and more than 300 others injured in Pakistan on Tuesday after a M5.8 quake jolted several cities in the northern parts of the country including capital Islamabad.

This first video is terrifying. In the second you can see some very big street damage due to the strong and shallow quake:

Deputy Inspector General (DIG) of police in Mirpur, Sardar Gulfaraz Khan, said that at least 19 people were killed and over 300 injured in Mirpur and surrounding areas due to the powerful quake.

INNA LILLAHI WA INNA ILAIHI RAJIOON. PRAYERS WITH THE DECEASED. OUR HEARTS ACHE FOR OUR BROTHERS AND SISTERS IN MIRPUR. MAY GOD HAVE MERCY.STILL WAITING TO KNOW ABOUT THE EXACT SITUATION IN URI, KARNAH, GUREZ AND OTHER AREAS BORDERING PAKISTAN. #KASHMIRHTTPS://T.CO/ERKMRRJ8C0
Pakistan Meteorological Department’s earthquake centre said the 5.8-magnitude earthquake was located near the mountainous city of Jehlum in Punjab province. According to US Geological Survey, the epicentre of the quake was near New Mirpur Pakistan.
DAMAGE TO ROADS IN AJK IN PAKISTAN AFTER THE 5.8 MAGNITUDE EARTHQUAKE JUST UNDER AN HOUR AGO – EPICENTRE IS 1 KM SE OF NEW MIRPURTHESE PICS ARE FROM THAT AREA PIC.TWITTER.COM/L1LEIQ5NHC
Some houses collapsed in Mirpur following the earthquake, Deputy Commissioner Raja Qaiser said. Parts of a mosque also collapsed in the area. Emergency has been declared in hospitals across PoK.

I HOPE EVERYONE IS FINE IN PAKISTAN. #EARTHQUAKEPIC.TWITTER.COM/KFXZS93QPQ
TV channels showed videos of heavily damaged roads in Mirpur, with many vehicles overturned. Several cars fell into the deep cracks on the roads.

The quake was powerful and created panic as people ran out of buildings, eyewitnesses said.