Prime Minister Benjamin Netanyahu on Thursday revealed what he said was a previously unknown Iranian nuclear site, saying it could contain up to 300 tons of nuclear material, and accused the International Atomic Energy Agency of failing to investigate findings that he presented earlier this year about Iran’s nuclear program.
Speaking to the United Nations General Assembly (full text here), Netanyahu also revealed what he said were Hezbollah precision missile sites hidden in Beirut, warned that Israel would act against Iran “whenever and wherever,” praised US President Donald Trump for defunding the UN agency for Palestinian refugees, and attacked the Palestinian Authority for paying monthly salaries to convicted terrorists.
The prime minister said the IAEA, the UN’s nuclear agency, had failed to take any action after he revealed in April a nuclear archive that Israeli spies managed to spirit out of Iran, and so he was now revealing what he said was a “secret atomic warehouse” in the Turquzabad district of Tehran, a few miles from the archive.

Netanyahu claimed the warehouse was used for “storing massive amounts of equipment and material from Iran’s secret weapons program,” which was quickly being moved to other parts of the city.
He claimed some 15 kilograms (33 pounds) of radioactive material had been recently removed from this atomic warehouse and squirreled away around Tehran, endangering the capital’s residents.
The site may contain as much as 300 tons of nuclear-related equipment and material in 15 shipping containers, he added. 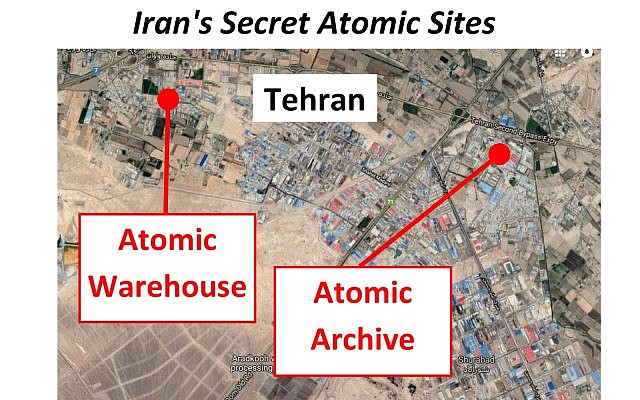 The disclosure came four months after Israel announced the existence of what it said was a “half-ton” of Iranian nuclear documents obtained by Israeli intelligence in the Shourabad neighborhood near Tehran.
Israel said the cache proved that Iranian leaders covered up their nuclear weapons program before signing the nuclear agreement. Iran hasn’t acknowledged the alleged seizure.
Both the archive and warehouse, he said, were proof that Iran had not given up its nuclear program.
“Iran has not abandoned its goal to develop nuclear weapons…. Rest assured that will not happen. What Iran hides, Israel will find,” he added.
He urged IAEA director-general Yukiya Amano, who he called “a good man,” to “do the right thing” and “go and inspect this atomic warehouse immediately — before the Iranians finish cleaning it out. Inspect “right here, right now,” he urged, “and inspect the other sites we told you about… Tell the world the truth about Iran.”
There was no immediate official reaction from Iran, which denies building nuclear weapons.